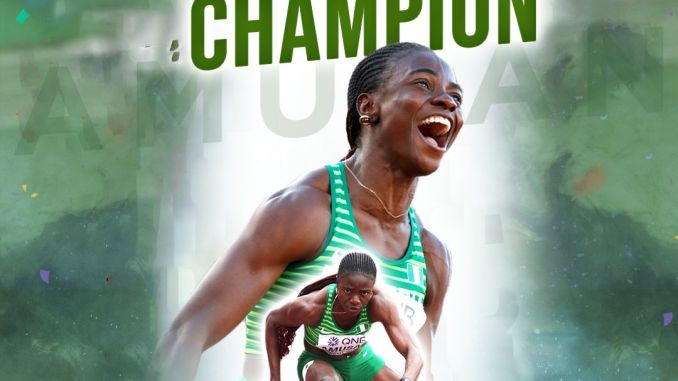 Nigeria’s Tobi Amusan has won the gold medal in the women’s 100m hurdles at the 2022 Commonwealth Games in Birmingham, United Kingdom

The world champion successfully defended her title at the Alexander Stadium on Sunday in the women’s 100m hurdles final.

Amusan was able to run a Games record of 12.30s, setting other records as well, and becoming the first world champion to win gold and the first Nigerian athlete to do the same.

Having done it on another continent, Amusan made sure to replicate that fine display in Europe, proving that it was no fluke and that it was indeed her time.

The 25-year-old ran a blistering 12.30secs to claim the gold and also set a new Games Record in Birmingham.

Coming up behind here were Bahamas’s Devynne Charlton (12.58secs) who took silver and England’s Cindy Sember (12.59secs) who took bronze with both some notable distance behind the eventual winner.

With this result, Nigeria has now won 10 gold medals and 31 medals in total.

Team Nigeria are now just one behind the gold medal record set by the 1994 team (11 gold medals) at the Commonwealth Games and six behind the total medals record (37 medals).

With seven competitions still holding potential for gold for the team on the final day and World Athletics Championship silver medallist Ese Brume still in competition later today, Nigeria can and will hope for more.

GOLD MEDAL & ANOTHER RECORD! Tobi Express 🚀🚀came like a rocket, blazing through the field. Not only did she successfully defend her title, she also broke the Commonwealth Games record. pic.twitter.com/EWFlCdCX7P